Move to the text

The Shoin Shinto shrine treasury is built in commemoration of a Shoin teacher inviting (2009) to (1859) in 150 years and 2009 when it is in 1859 after it was done death from penalty, junsetsu in the Edo era by the Mass Execution of Ansei. It is aimed for eternal preservation with the writings, the article which a Shoin teacher was left for and, through displaying them, tells in thought of Mr. Shoin in the present age.
The treasure building is divided into a free zone and the paid exhibition room and introduces the ground of a life of Mr. Shoin and the connection in Hagi-shi in the free zone, and it is in the contents which are worth seeing only in this. In the paid exhibition room, I display isumi, the mementos of the teacher coming to the Shoin Shinto shrine clearly and aim at what you are satisfied with from an expert of the history to a beginner.
In addition, I establish the museum shop in the free zone and sell the original goods which are available only here.

▼A throughout the life graphic "life of the Shoin"
I summarize the life of the Shoin teacher in 2.4 meters in height, one piece of chronological table panel of 8 meters in length and I use the liquid crystal displays of the fitting into and offer information.

▼The treasure display "study of the times"
I display isumi, the mementos of the teacher. You gain a partition between a treasure and treasures and can appreciate one treasure slowly and carefully. There is a detailed commentary panel to each treasure, and it is in contents easy to read.

▼Between permanent construction display "ryukon"
I display will "ryukonroku" to a disciple, the private school student who a teacher writes it on the day before died from penalty, and was made i. I introduce the whole sentence and display a "word friends book" "book of eiwake" at the same time and convey the thought of the Shoin teacher.

▼The digital display "library of the search"
It is the display that can search a photograph and the commentary of the treasure on a computer freely. There are many treasures that the real thing is not displayed and can see it anytime.

▼Museum shop
I sell the goods of the treasury original. Other than a classic clear file and ball-point pen, I reproduce the manuscript paper which I used in Matsushita private school in a village. In addition, I handle possession treasure pictorial record and various books.

▼The light garden "garden of the patriot"
Sue pillar of the Hagi ceramic ware and one one Mt. Kasa-yama stone of the bush clover express patriots of the Matsushita private school in a village including the person that it was a foundation and the patriot that it was and a leader of the Meiji Restoration government or a central figure of the economic world with youth in its twenties through a revolution led by a Shoin teacher by the late Tokugawa period, and they are located in the garden symbolizing the delta of the bush clover. I spread bush clover glass with the pavement. As for the whole constitution, as for photographer Nobuo Shimose, the Hagi ceramic ware Sue pillar, Kazuhiko Miwa was in charge of. 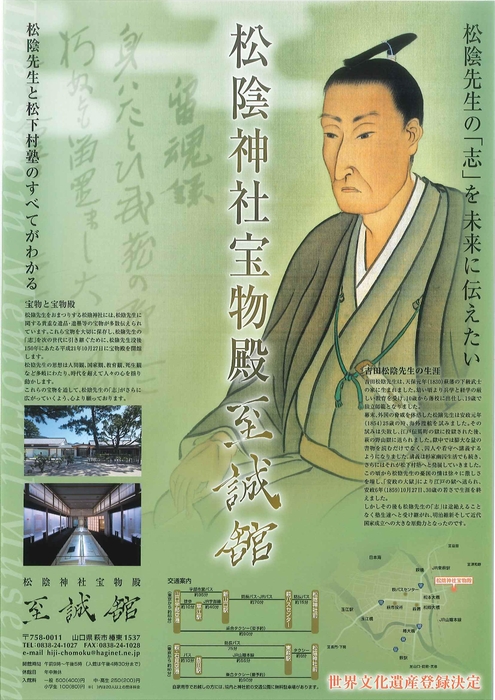